Society’s View of Mental Illness through the Ages

Society’s View of Mental Illness through the Ages

Throughout cultural history mental illness has been attributed to the influence of supernatural forces, the possession by evil spirits, demons or being a result of displeasing deities. Trephined skulls to release bad spirits are reported going back to the Neolithic Age (Porter, 2002, p. 10). Demonological thinking was prominent in early Chinese, Egyptian, Babylonian, Greek […] 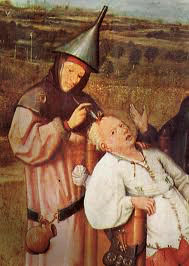 Throughout cultural history mental illness has been attributed to the influence of supernatural forces, the possession by evil spirits, demons or being a result of displeasing deities. Trephined skulls to release bad spirits are reported going back to the Neolithic Age (Porter, 2002, p. 10). Demonological thinking was prominent in early Chinese, Egyptian, Babylonian, Greek and Hebrew culture and culminated in the ‘Lunacy Trials’ of the Dark Ages, explaining mental illness by witchcraft, and the practice of exorcism (Kring, 2011, p. 9-10). The first physician who denied the influence of supernatural forces and suggested natural causes for ‘diseases of the brain’ was Hippocrates (Butcher, 2007, Kring, 2011). Upcoming asylums in the 15th century facilitated the life-long and inhumane institutionalization of mentally ill persons. Asylums were synonymous with cruel abuse serving public entertainment (Butcher, p. 37, Kring, p.11) until Philippe Pinel started reforming and humanizing asylums end of the 17th century (Kring, p.12). Scientific understanding of mental illness started late with discoveries of Louis Pasteur and Francis Galton, but still lacked ethics and human understanding as the infamous eugenics movement at the beginning of the 19th century demonstrated (Black, 2005). It wasn’t until the work of Sigmund Freud that mental illness was formulated conceptually in psychoanalytic theory and in its trail, based on experimental-rational observation, via behaviorism (Kring, p. 17-22). The focus on human needs and development was the work of pioneers such as Adler, Jung, Erikson, Fromm, Maslow, Rogers, Horney and Klein. We can conclude that the paradigm shift from irrational to rational beliefs about mental health is not attributable to science alone, but the combination of science with humanistic philosophy that recognizes patients as subjects, not objects of assessment and treatment. As a result we see patients today as individuals whose personal development as well as social- and occupational functioning should be supported. This perspective is enhanced by the current global transformations of social life-worlds reinstating questions of the good life (Robbins, 2008).

The importance of modern psychological appraisal and treatment for mental illness

Modern clinical appraisal entails the use of idiographic (individual) and nomothetic (shared across individuals) tools to assure internal consistency, inter-rater reliability, content- and construct validity, allow for generalization and sensitivity to treatment change. Besides, psychometric instruments also have to prove clinical utility (Hunsley et al, 2008, p.7). Evidence-based practice (EBP) should include best available research to serve patients, clinical expertise promoting positive therapeutic outcomes and should collaboratively respect a patient’s context, including culture, individual personality, strength’s and preferences since positive mental health outcomes depend on a patient’s active involvement (Norcross et al., 2008, p.5-6). In individual case-formulation treatment response informs and revises diagnosis to optimize treatment outcomes and it avoids the labeling of clients.Case formulation in psychology should not be confused with clinical diagnosis in psychiatry.

Biological Factor: in the case of correctly diagnosed Bipolar Disorder a pharmacological approach would be adequate considering the administration of  newer generation SSRI’s or SNRI’s (Seligman et al., 2007, p.45).

I understand mental illness from both a humanist and pragmatic, problem-solving perspective which entails positively empowering a patient’s Self as well as his or her social- and occupational functioning. Appraisal requires to be conducted by proven and reliable multi-item tools that demonstrate content and context-validity to allow for an in-depth clinical understanding. Besides, psychometric instruments have to prove clinical utility and efficacy. Treatment planning needs to include a review of state-of-the art research, standardized diagnosis, assessment of epidemiology, primary and secondary symptoms, properties of a disorder (onset, course and duration) and etiological identification of underlying biopsychosocial factors (Seligman et al., 2007). Treatment logically addresses diagnosed properties.