It is all about inequality, isn’t it? A Critique of Rawls’s Theory of Justice

It is all about inequality, isn’t it? A Critique of Rawls’s Theory of Justice

John Rawls (left) and Immanuel Kant (right) Introduction Inequality appears on the global stage as the evil of our time. There is hardly a single researcher or scholar who does not agree on the correlations between inequality and unjust, deeply dysfunctional societies, such as studies by Richard Wilkinson and Thomas Piketty investigate. For example, inherited wealth is a […] 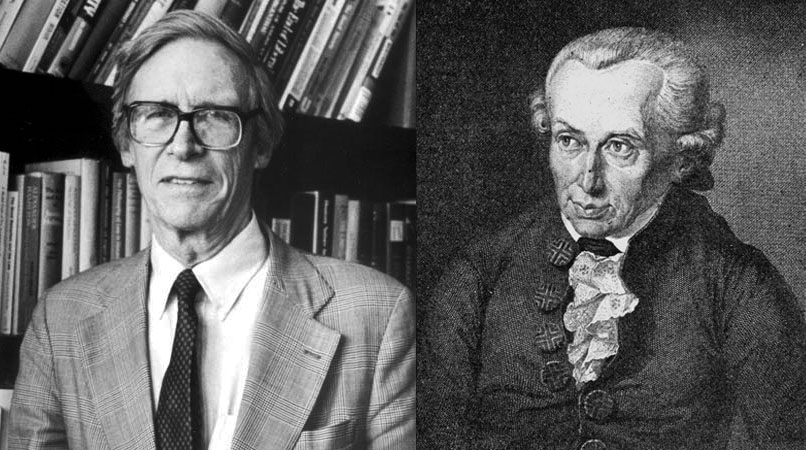 Inequality appears on the global stage as the evil of our time. There is hardly a single researcher or scholar who does not agree on the correlations between inequality and unjust, deeply dysfunctional societies, such as studies by Richard Wilkinson and Thomas Piketty investigate. For example, inherited wealth is a distributive problem of justice as much as inherited poverty is. Many nations struggle with the fact that the rich get richer and the poor get poorer while middle classes erode. But what is the real concern? John Rawls defined his famous ‘difference principle’ by the following terms: ‘Social and economic inequalities are to satisfy two conditions: (a) They are to be attached to positions and offices open to all under conditions of fair equality of opportunity; and (b), they are to be to the greatest benefit of the least advantaged members of society.’ (Rawls, ‘A Theory of Justice’, 1971 and ‘Political Liberalism’, 1993)

‘The Comfortably Poor’: A thought-experiment to question Rawls’s assumptions

I am proposing a thought-experiment titled ‘The Comfortably Poor’. Imagine a society where the wealthy have decided to comply with Rawls’ difference principle: They contribute a considerable amount of their wealth to the less fortunate of society and the money is spent, as intended, to balance opportunity and wealth. Most poor are alleviated in the process and they advance from being poor to being comfortably poor. They eventually enjoy the same rights to vote, the same access to education and to the job-market as everybody else, but lack the motivation, perhaps due to prior conditioning, as well as the drive and enthusiasm to advance much further. Many of the less well-off have decided to stay happily content this way, they are comfortably poor.

We may, to add a variation, even invite social mobility into the equation, such as wealthy people who decide to be rather comfortably poor than to be mind-boggling rich, or poor people who decide they’d rather be well-off. Even when satisfying the two conditions of the difference principle, society would still be trapped in a self-stabilizing inequality equilibrium. Perhaps this is all that Rawls had hoped to achieve, to avoid injustice in the form of poverty and diminished opportunities to the less fortunate.

Society, in this thought-experiment, would turn into an Aldous Huxley-like ‘Brave New World’ where justice has been served, nobody can complain to have their rights shortchanged, but the social arrangement cements de facto a hierarchical society where the difference principle has been instrumentalized by one class happily relying on another for the mutual benefit of a stable political system. (To those readers who wonder – this example is partially a parody of Thailand, where I currently reside, and where the poor are rather content since the basics of life are taken care of).

Identifying the driving forces behind justice

Before objecting to this idea on Rawls’ behalf, or giving a plethora of empirical reasons to why the example may not apply, we may consider the following: Isn’t what we are really concerned about not inequality per se, but indignity? From a Kantian perspective, what we are really concerned with are undignified living conditions that prevent people from exercising reason, and as such deprive them of freedom and autonomy. Aristotle and Kant may have both agreed that it is the active participation, the democratic practice, to make public use of one’s ability to reason, that truly empowers the less fortunate.

One could ask now where the obligation derives for the wealthy to support the less well-off. In a Kantian model it would be the original social contract which, like for Rawls, is a hypothetical and not empirical assumption. But the underlying motivation is to empower people, in the widest sense, as rational agents, not for the sake of equality but for their own. The motivation to care for the less fortunate in a Kantian model derives from achieving dignity, freedom and autonomy for all persons in general. From here not only fair redistribution, but the motive for redistribution, which is social empowerment, can be concluded. To base a theory of justice on the individual and collective faculty to reason, as well as the motivation to collectively enter into a social contract in order to escape the tyranny of a state of nature (Locke),  appears to be a more defensible position rather than to postulate an imaginary veil of ignorance.

From a phenomenological perspective we may ask why should we agree to the assumption of Rawls’ ‘original position‘, the veil of ignorance, as an imaginary construct since it bears no relation to any person’s real experience? And why would we assume that people comply with the condition of equality after the veil is lifted?

2 thoughts on “It is all about inequality, isn’t it? A Critique of Rawls’s Theory of Justice”