The Creative Mind: Kant, Hegel and the Complexity of Life in the 21st Century

The Creative Mind: Kant, Hegel and the Complexity of Life in the 21st Century

Artwork: Through spirit’s gaze by Andrew James Campbell. Acrylic on torn paper. A4 1982. With kind permission of the artist. The source of the title is “The Spirit shall look out through matters gaze, and matter shall reveal the Spirits face” Sri Aurobindo Kant and Hegel, 2.0 When Kant postulated in a Cartesian manner that […] 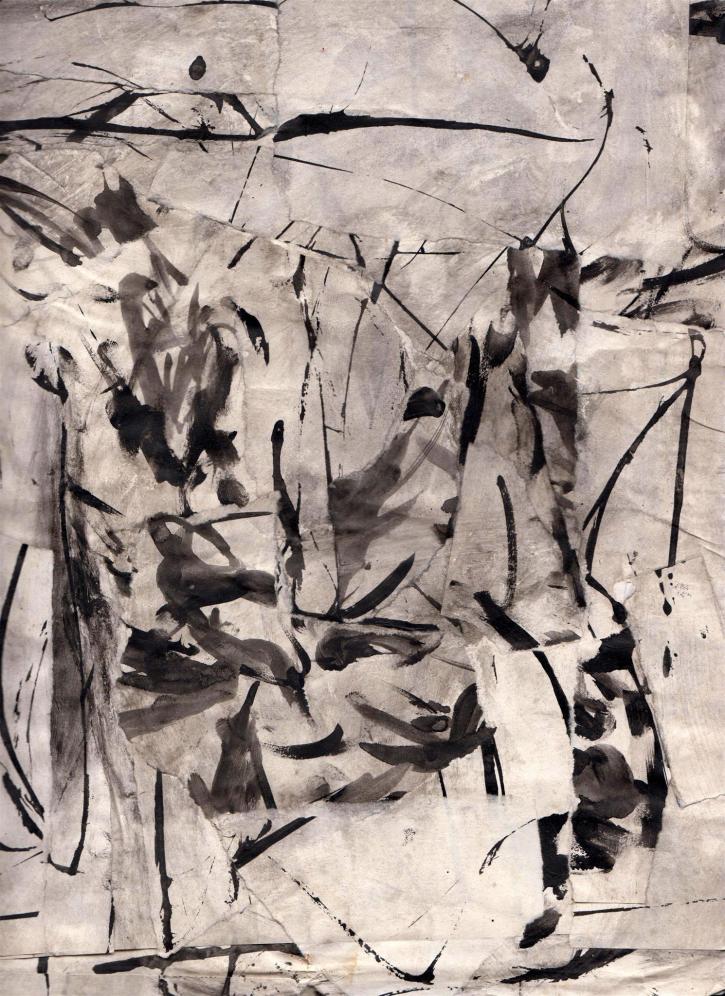 Artwork: Through spirit’s gaze by Andrew James Campbell. Acrylic on torn paper. A4 1982. With kind permission of the artist. The source of the title is “The Spirit shall look out through matters gaze, and matter shall reveal the Spirits face” Sri Aurobindo

When Kant postulated in a Cartesian manner that we are the children of two distinct worlds, the cognitive and the empirical, and that we can derive clear-cut conclusions from there, he was rightfully criticized by Hegel that things may not be as easy as they seem. Assuming that we do not live in a dualist, but in a coherent material reality where the biological-cognitive domain emerges from physical groundings (despite enjoying distinct supervenient-symbolic sets of freedom), such a view entails an organic, rather than a Kantian-categorical model of how our mind, the world and others relate. As history progresses, Hegel’s subject-object evolves and expands through cultural evolution. For Hegel, subject and object constitute each other reciprocally. The concept of such a ‘subject-object information field‘ was also introduced as a scientific paradigm by Eleanor Rosch for the domain of cognitive psychology.

When it comes to creativity, it is not only the artists who create, but scientists, engineers, business-groups, culture, society and the world at large. Generally speaking, all life that is self-sustaining and self-regulating requires creativity, the development of future-oriented, open developmental paths in order to persevere and to evolve. Without it, we would perish or our minds would devolve into repetitive, self-congruent fractal patterns. Once environmental conditions stall, so does evolution. Once environmental conditions become more dynamic, creative evolution starts to get busy.

For Hegel, intuition and concept were just different aspects of the same subject-object unity within a common reality. Kant excelled in his insight that the freedom to reason about our world is a distinct mental property which might be explained by, but not reduced to neurological processes. On the other hand, we can spin Hegel’s argument regarding Kant further: Not only is humanity a mean within itself which cannot (and should not) be instrumentalized, but the same argument extends to the material conditions that safeguard our integrity as rational agents. Examples are the access to education, the availability of creative tools and stimulating environments to develop one’s faculties, the integrity of body, the malleability and adequate development of the brain, the practical autonomy as a person and so on and so forth.

The freedom of our mind matters as much as the material conditions that enable it. The extended Hegelian argument goes as follows: If there is in principle only one physical reality (nature, also following Spinoza’s path here), then the laws of self-governed freedom must apply to all; not only content and form but also the physical grounds that allow conceptual form and mental content to emerge.

The creative mind works from both ends, from the conceptual-cognitive as much as from the intuitive-emotive. Modern psychology and neuroscience have dismissed the mechanical idea of people as thinking machines; or ‘thinking animals’ as Descartes described himself in his Meditations. Without emotion, we could not think, an argument elaborated upon by neurologist António Damásio in his book ‘Descartes’ Error’. Without the empirical reality of our embodied minds, our needs, desires and vulnerabilities, we would have no motivation and no grounding to come up with a single thought. From a Hegelian perspective, environment and mind, intuition and concept, object and subject constitute each other reciprocally as a function of environmental interaction. We may mention Kurt Lewin’s equation B = ƒ(P, E), namely that behaviour is a function of the person and the environment. This approach makes more sense than postulating ad hoc metaphysical ideas about life and reality since reciprocality (bi-directional, mutually constituting causality) can be measured and verified scientifically as a phenomenon of our common and shared reality.

Creativity as a Vulnerable State of Mind

Being able to talk about things constitutes us as human beings that can marvel, play, discuss, react and ponder about the world and others. Verbal, non-verbal language and action act as the glue between empirical and mental domains, whereby empirical conditions become the material placeholders for mental content and processes. As such, the mental is folded inside the empirical conditions that surround it. From a phenomenological perspective, we could call this the empirical bracketing of mental content. Creativity, as a bracketed process, evolves in the gentle, protected space where empirical conditions are not too tight to suffocate or destroy creative freedom and not too loose that the mind has only a paucity of environmental stimuli to fall back upon.

Creativity finds itself among adjacent human faculties. According to Sternberg’s Triarchic Theory of Intelligence, the creative intelligence is complemented by analytical and practical intelligence. His choice of categories is peculiar as it echoes the underlying matrix of the information field; this is that the polarized object-subject field collapses between its two poles (the creative and the analytic) and concludes in social action and individual behaviour (Sternberg’s practical intelligence).

The creative action reveals itself always a collapse, a judgment call, a point where subject and object, mind and physical conditions unite. Subjective and objective information is woven into a coherent fabric by the loom of life in which we appear as finite beings within a practically infinite process. It is in our actions (inclusive of speech-acts and electronic interaction) that we constitute ourselves as rational beings. Spinoza might have added that those who dedicate their intellect to the search of such truth are blessed. Truth-searchers are enlightened as they recognize humbly their necessary incompleteness and fallibility. They remain mindful as they position themselves as responsible, autonomous beings. Like a glass of water, the fluidity of the water serves as a metaphor for creativity while the composedness of a rational mind, the function of the glass, holds potentials together. Creative processes need ratio as its guiding vector while ratio depends on creative processes as its source of inspiration, its ground for innovation and renewal.

Regarding the dimensionality of creativity, much depends on our point of view. On the level of object-materiality, the creative mind recombines objects and shapes them within information hierarchies. We extract features, recognize patterns, chain and cluster, copy and paste, recombine and sort, analyse and synthesise, create interactive building blocks, define a system’s syntax (such as computer languages) to serve an instrumental purpose and so on. Object-materiality also engages our senses and emotions to which it guides our decision-making. The latter not only serves to create more pleasing outcomes but, in combination with our mental faculties, to create sustainable outcomes that are beneficial to all. This is the level of material design and hypothetical imperatives.

On the level of subject-object and inter-subjectivity, semantics appear on the horizon and we are dealing with what the Philosophy of Mind has defined as qualia. The creative mind takes semantics and qualia into consideration to create new forms, to morph, to evaluate, to restructure typology, to diversify in order for creations to serve and reflect the plethora of the human lifeworld and experience. As life’s paths are developmental open, so must creations serve the openness towards our shared future. As we need information and data to process semantics and qualia, we could call this type of creative processes ‘In-formations’ (to put into a form) since they address the development of ideas based on facts (idea), the meaningful creation of typologies (typos) in order to relate ideas to concepts and the need to change the overall form of structures (morphe) to suit human needs. On this second level, we design not only artefacts but systems. In system design, empathy is critical. The rational grounding of empathy lies firstly in the Kantian recognition that all individuals regardless of particulars are categorical representatives of mankind and secondly in the notion that no single man-made system stands in isolation of another. Hence, our emotional interest in the plight of other stakeholders is a ‘rational emotion’ (from a Kantian perspective). In endorsing empathy, we recognize the state of the rational grounding of others. We not only accept other’s dignity, but we also respect the systems they engage to make sense of the world. Ideally, we co-create systems.

Finally, on the level of environmental interaction, creativity transcends the subject-object. We interpret, re-define, constitute our social Selves, embed our lives in cultural memory, make gutsy lifetime decisions and undertake deep emotional investments, develop concepts, get inspired by intuitions and think critically about the relationships between ourselves and our future possibilities in the context of the environment. Since we are dealing with a global and holistic view of the subject-object phenomenon and its continuing transformations, we could name this type of creative processes ‘Transcendations’. It defines all processes that transcend their self-congruent borders and reformulate a system’s local particulars in view of global development and emergence. From a psychological perspective, cognitive dissonance and cognitive restructuring are the keywords.

From a scientific perspective, looking through our mental lens, we just defined different levels of detail and interaction, whereby each point of view enjoys its particular merit. All three levels of engagement challenge our individual and collective competencies, in particular with regard to increasing system complexity.

To conclude, creativity is not an arbitrary subjective faculty that escapes objective measure. This would be both the wrong perception as well as the wrong underlying question. The whole point of intact (flowing and exchanging) information fields is not to infer a preferred view within the object-subject (e.g., a spiritualized mind over matter belief or big data manipulating personal integrity) but to realize that the creative process requires a formal scaffolding and modes of creative processing in order to inform qualitative and quantitative aspects of research and investigation. To this extent, creativity is perhaps also the deepest political force of all, more profound than any ideology ever could, as we find our new historical role as designers of globally compatible and beneficial systems. Measuring our aspirations against real-world outcomes, the openness towards critique and ongoing improvement becomes our most precious virtue. The higher our standards, the stricter our self-critique.

The Creative Reasoning of Actors

But who are the drivers of change? The material grounding of good design is stakeholders, not shareholders or onlookers. It is only when participants can bring their genuine interests, intuitions, perspectives, sufferings and passions to the table that we can complement those original requests by mindful conceptualizing, not by automated technocratic processes. Kant delivers the deciding argument here and I shall extend his proposition a bit. Only by critical reasoning as well as making our creative reasoning a matter of public discourse for the sake of a better lifeworld design, we can evade the pitfalls of dehumanizing our environment to the point where autonomy and freedom slip off our hands. The argument is that once the conditions for open systems creation become means to a purpose and surrender to hypothetical imperatives (such as e.g., by commercialisation or the maintenance of privilege at the expense of others), spaces for sensible negotiations and co-creations between stakeholders deteriorate or vanish. Creativity in the 21st century has never had so many options and has never been in so much peril of being instrumentalised. We need to work hard, stay open-minded, be patient, listen to our hearts and take uncomfortable risks for mind to matter.

Special thanks to Andrew James Campbell for all our conversations inspiring this script.