About the Methodology of Social Change

About the Methodology of Social Change 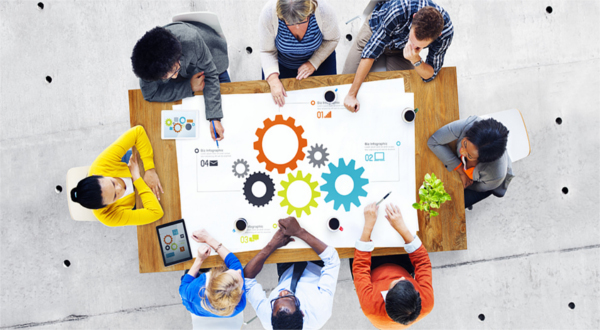 The emergence of cooperative research

The Problem of Traditional Research Cycles

The biggest challenge to social sciences is the alienation between research and application. In social sciences and education, few empirical findings find their way back into improving everyday life and not everything that is being researched is of relevance in real-world settings. The gap between theory and application, between expert cultures and social actors, is grounded in traditional belief models.

Typically, it is assumed that a social problem, which is identified by researchers and decision makers, requires quantitative analysis to be objectively addressed. The tool of choice is empirical studies that reveal the causal, correlational and conditional relations of a social problem, e.g., by employing statistical methods such as regression models or structural equation models. At the bottom of the scientific hierarchy, we find smaller single-case studies, followed by correlational research, quasi-experimental studies and on the top meta-analyses and Randomized Controlled Field Trials (RCT/ RCFT). The latter is highly structured for the quality of reporting ‘enabling readers to understand a trial’s design, conduct, analysis and interpretation, and to assess the validity of its results.’ (CONSORT, 2010).

A problem that science despite all rigour, however, cannot reflect is the roles of involved decision-makers who interpret and apply scientific studies on behalf of their employees, staff as well as their users. A good example was the PISA studies that had a major political influence on educational governance across Europe. Local school principals, teachers, parents and students could only watch in disbelief how politicians surrendered to a merely economized view of education based on the measurement of few scant competencies. The top-down approach of monopolized research implies a number of problems when looking at developing sustainable social solutions. The most prominent critique is that social actors are degraded to mere data sources, for example via survey-based research, but they are not included as actively contributing rational agents.

(1) CONSTRUCT COMPLEXITY AND ENVIRONMENTAL VALIDITY: The complex nature of people’s lifeworld (their needs, interests, perspectives, motivations, ideas and wishes) is excluded in traditional research. The traditional objectifying approach, e.g., by limiting questions and potential answers of social actors to Likert Scales, imposes a reductionist perspective right at the beginning of the research process.

Traditional research implies a number of conceptual assumptions that may not coincide with the context in situ. Quantitative studies work well in settings where a problem can be clearly defined beforehand, such as medical problems with experimental- and control groups, but they necessarily fail in the case of social solutions development that depends on the active and adaptive contributions of social actors. In this case, the relation between research and research subjects is of an entirely different nature – one is descriptive while the other is participatory.

(2) DISEMPOWERMENT: This argument states that social actors are denied ownership of the problem at hand. By circumventing the perspectives of affected parties, participants of social transformation are excluded from the discourse to improve their environment. As a result, frustration and resentment may set in as participants are degraded to passive onlookers on the implementation of top-down policies. In addition, research and policy-making lose individual and collective meaning which otherwise would have emerged via active participation.

(3) SOCIAL INPUT AND DEVELOPMENT: Traditional empirical research rests on a number of unreflected assumptions. For example, which should be the desired effects of an intervention from the perspective of social actors, which noticeable criteria can measure these effects and which local resources are available to accommodate improvements? It is one perspective to abide by professional standards, such as promoting the acquisition of competencies or to develop individual autonomy, and another to empower social actors to work on solutions taking their unique cultural tools, personal motivation and local resources into account.

(4) SUSTAINABLE OUTCOMES: Social models that are created in cooperation naturally develop areas of corresponding responsibilities. Systems, where policies are imposed onto populations externally, suffer from the drawback that nobody feels in charge of managing them due to the lack of ownership. People assume responsibility for the systems they create.

The development of participatory models

We may take schools as an example. How a school deals with diversity, heterogeneity, its psychological climate, social support networks or mechanisms for continuous improvement is entirely based on the coordinated effort of the administration, teachers, students, their parents and the social context at large.

Due to the need for consensus, social problems and their consequences need to be set in relation qualitatively (Which is the meaning of problems to the individual and which are their social impacts ?) as well as quantitatively (How do problems scale in the social sphere?). Typically, such questions are more adequately addressed in mixed study designs. Mixed-study designs, unlike large quantitative studies, recognize the complexity of social transformations but still fall short of the criteria of democratic empowerment and cooperative local development. New innovative scientific approaches that are based on the input from social actors will be discussed in Part 2 of this essay.

From a data perspective

From a data perspective, we could state that in traditional research a fixed statistical method, based on collected data sets, is employed to determine the significance of effects or the causal interdependencies of factors within a construct. By contrast, in cooperative research, we need to design logical operators (methods) in such a way that we derive at a measurable, computable result. The traditional statistical method is fixed by its choice of initial study design, while cooperative efforts are based on the premise of performing adaptive process changes (competitive prototyping) in regards to achieving desired outcomes.